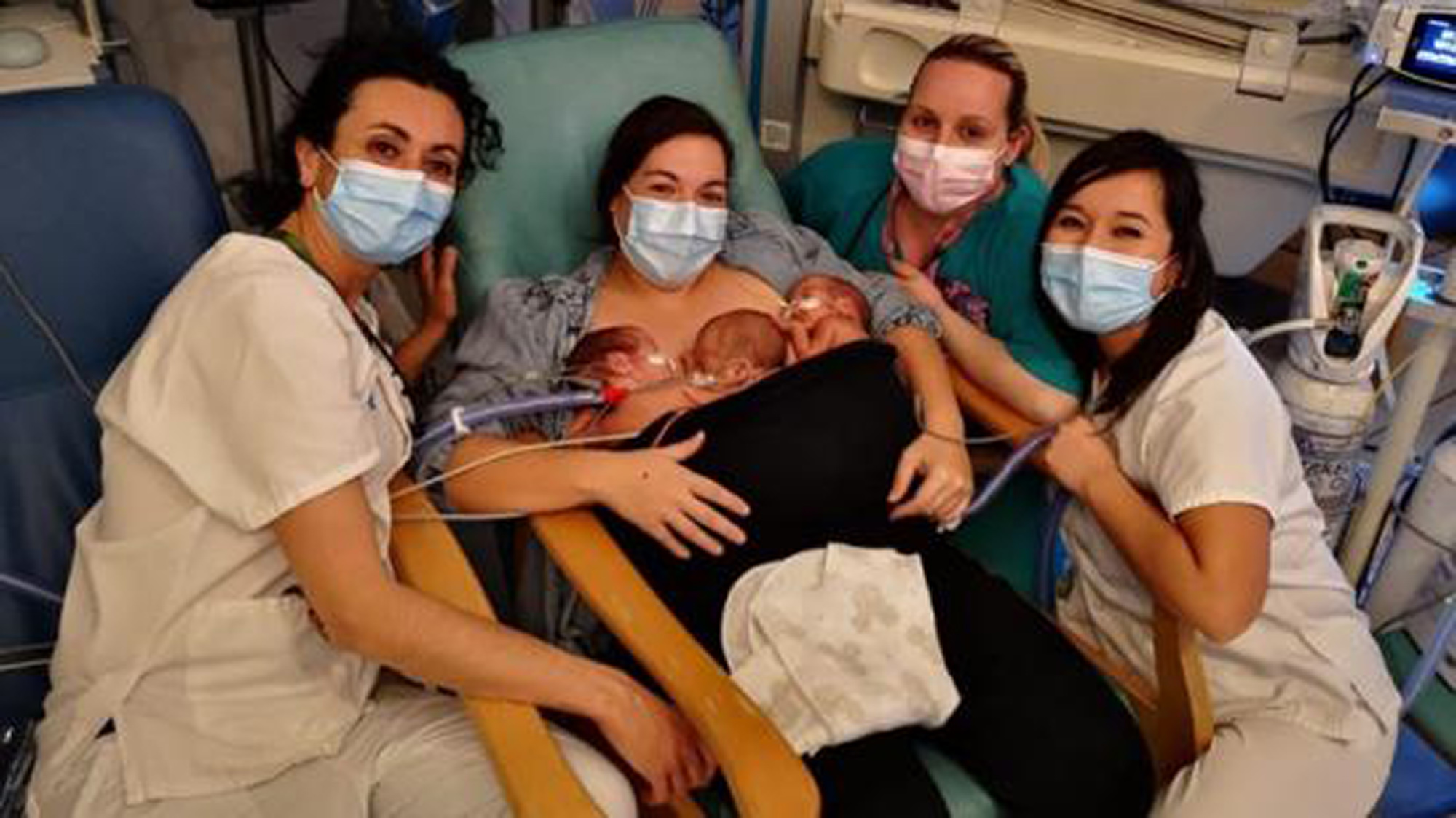 Human babies love to stay close to their mother’s skin, like joeys in their pouch.
The post Roo’d Have Thought It? Preemie Triplets Won’t Be Parted From Mom, Just Like Baby Kangaroos appeared first on Zenger News.

Triplets who were born prematurely after 28 weeks of pregnancy lay against their mom’s chest, receiving the benefits of “kangaroo care” — skin-to-skin contact — which is said to simulate the environment experienced in the womb.

Roc, Aleix and Arai were born at the Vall d’Hebron University Hospital in Barcelona, Spain, on March 20.

Their parents, who are unidentified, had expected the birth to be in the 34th week of pregnancy, as multiple births tend to be. But 60 days earlier, the mother was rushed to hospital.

“A pregnancy involving triplets means that three times the space is occupied in the woman’s womb and for this reason, they tend to be born prematurely,” said Dr. Felix Castillo, head of the hospital’s Neonatology Department.

The babies, conceived through in vitro fertilization, were delivered by caesarean section, Castillo said.

Kangaroo care was considered crucial for the babies’ well-being since they were premature — born before the 37th week of pregnancy — each weighing less than 5.5 pounds. The triplets also spent some time in the Intensive Care Unit as they needed oxygen.

While kangaroo care required in this case, doctors were concerned it might be difficult for the mother to fit all three babies on her chest at the same time. Also, the babies would need to be supplied with oxygen while resting.

Kangaroo care was started one week after the triplets were born, the doctor said.

“We moved to use the method quickly,” Castillo said. “With triplets it is common practice for both parents to share with two babies on the mother and one on the father.”

Kangaroo care is said to improve the development of premature babies’ brains, as well their heartbeat frequency and breathing. With this type of care, babies sleep more, feed and digest better.

The smell, the voice and the heartbeat of the parent recreates what the baby experiences in the uterus.

Castillo said that “mom and children are relaxed by the process, but the monitors also show the baby improves in saturation. It decreases its stress; the heartbeats and the clinical situation is stabilized.”

“It was heartwarming to see the face of the mom, the nurses and the assistance when the skin-to-skin method was done with the triplets at the same time,” Castillo said.

While the babies were lying close, the mother’s eyes “were lit up with joy, and the three kids were very relaxed, as they have lived for 28 weeks together in their mom’s belly. Gathering all three together, in contact with their mom, was an amazing part of this case,” he said.

The babies are still in the Intensive Care Unit, though the parents generally spend all day with them, only going home at night.

The babies now weigh just under 5 pounds, so they cannot all fit against their mother as they did earlier.

“There is no longer room for all three of them, so instead they take turns. The dad is also now involved in carrying out the method,” the doctor said.

“They are still very small. Bear in mind they are in the 31st or 32nd week of pregnancy, but they are fed through a catheter filled with the mom’s milk and the milk from other moms who donated to a milk bank of the hospital. However, one of them is having intestine problems, so feeding that baby is being done through an IV.”

Castillo said the triplets will be released when they are able to feed by themselves, reach the 40-week mark, are not suffering from apnea and are clinically stable.

In Spain, 29,000 premature babies are born every year, representing 75 percent of the hospitalizations in the Neonatology Department, according to the Spanish Society of Neonatology.

Premature babies commonly have health problems, such as the loss of body heat, issues with feeding and increased likelihood of infections.

The post Roo’d Have Thought It? Preemie Triplets Won’t Be Parted From Mom, Just Like Baby Kangaroos appeared first on Zenger News.

@ashishkjha @GovMurphy My governor is keeping them too. No one cares. Masks have come off since Thursday. This was the last straw in terms of trusting @CDC guidance. I am a biologist and I just can’t. What a stupid stupid stupid move.
View on Twitter
2
0

@ashishkjha @GovMurphy My governor is keeping them too. No one cares. Masks have come off since Thursday. This was the last straw in terms of trusting @CDC guidance. I am a biologist and I just can’t. What a stupid stupid stupid move.
View on Twitter
2
0