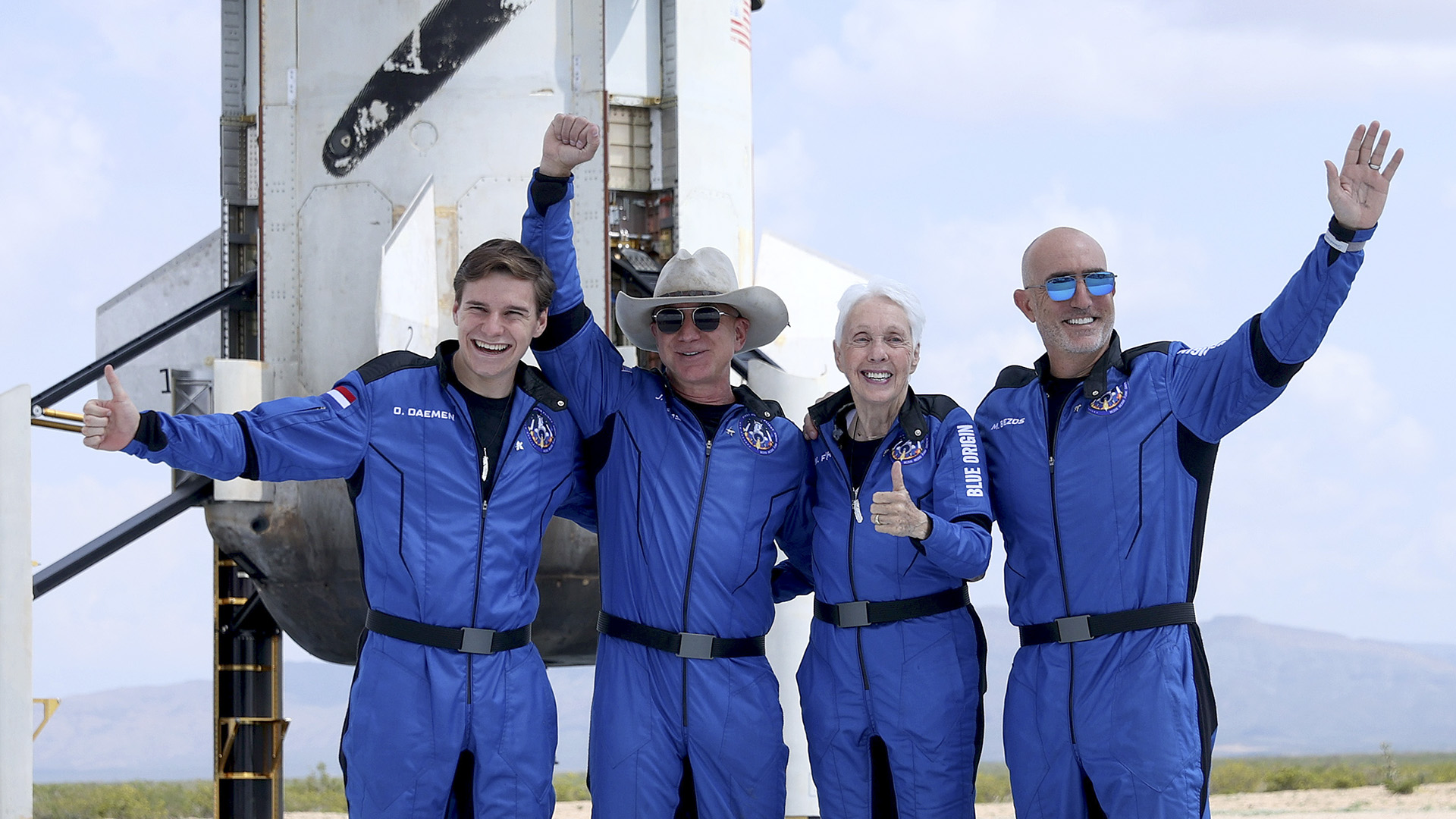 TEXAS CITY, Texas — Amazon’s billionaire founder Jeff Bezos and the crew of his spaceflight service Blue Origin completed a space voyage on July 20. They were flying on the New Shepard, the rocket ship made by Blue Origin.

“Congratulations to all of Team Blue past and present on reaching this historic moment in spaceflight history. This first astronaut crew wrote themselves into the history books of space, opening the door through which many after will pass,” tweeted Blue Origin.

The 10-minute flight went up more than 60 miles above Earth. The crew members aboard Blue Origin’s New Shepard will hold a press conference after their successful spaceflight this morning, as per a media report.

“Best day ever,” Bezos said on a live stream of the suborbital flight provided by Blue Origin before the capsule landed.

After decades of waiting, Wally Funk finally accomplished her dream of flying to space, becoming the oldest person to do so.

The 82-year-old pilot volunteered as a member of the “Mercury 13” program, otherwise known as the “Women in Space Program,” in February 1961, which was a privately-funded effort intended to begin training women to fly in National Aeronautics and Space Administration’s (NASA) earliest space programs, as per a media report.

“I got ahold of National Aeronautics and Space Administration four times and said, ‘I want to become an astronaut,’ but nobody would take me,” Funk said.

“I didn’t think I would ever get to go up. Nothing has ever gotten in my way. They say — Wally, you’re a girl, you can’t do that. I said — Guess what doesn’t matter what you are, you can still do it if you want to do it, and I like to do things that nobody’s ever done before.”

Funk has extensive experience piloting aircraft, logging over 19,600 flying hours, and teaching more than 3,000 people how to fly private and commercial aircraft.

Also making history in the Blue Origin spaceflight was 18-year-old recent high school graduate Oliver Daemen, who became the youngest person to travel to space, as per the media report.

Daemen was Blue Origin’s first paying customer, and his father, a Dutch financier, purchased his ticket. Daemen replaced a mystery bidder who agreed to pay $28 million for a ticket but had to reschedule for a later mission because of “scheduling conflicts.”

“I watched Blue Origin’s Flight to space this evening. Their vehicle flew to space & back to Earth in 10 minutes, 14 seconds. You could fly from Joburg through Gaborone & land in Windhoek in 3 minutes. The science is amazing, but us [Africans] — we believe in Prayer & Fasting!!” tweeted author Joseph Kalimbwe.

Earlier this month, another billionaire businessman Richard Branson became the first person to ride into space aboard a rocket he helped fund — beating Bezos by nine days.

(With Inputs from ANI)

@MichaelGWeaver @robbystarbuck @NIH @WHO @cdc @WhiteHouse There are dying. Something like 95% of all COVID attributed deaths are among unvaccinated.
View on Twitter
0
0